Our criminal law knowledge and experience in arson offences is your best defence.

40+ Years of combined experience defending criminal matters means a successful outcome is on the table.

We’re in it to win it and we fight hard for our clients. That’s why anywhere you look you will find only 5 star reviews.

Arson is an extremely dangerous criminal offence. This is particularly so in Australia where bushfire risks are severe, and the likelihood of an arson attack causing widespread destruction of property is high.

In New South Wales, the criminal law offence of arson is provided for by the Crimes Act 1900 (NSW). These provisions have abolished the common law offence of arson, to be replaced by a series of amendments which include serious offences dealing with the destruction of property by means of fire. In addition, offences relating specifically to bushfire arson have been enacted more recently in response to increased offending of this kind, and environmental conditions which significantly increase the likelihood of widespread property damage caused by arsonists. 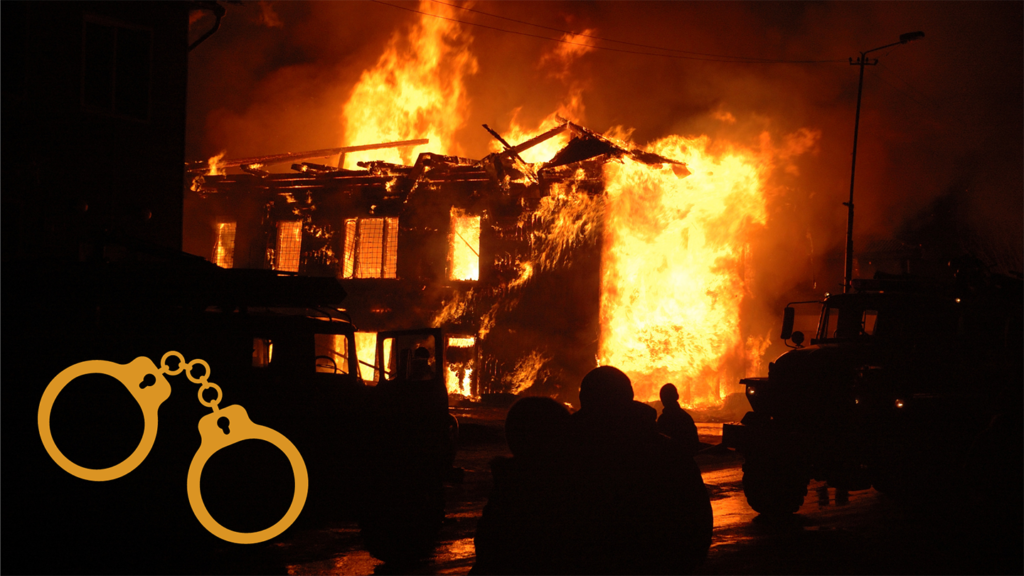 Note that this article deals specifically with the law of arson in NSW. For legal advice relating to the relevant law of another State (Victoria, South Australia, Queensland, etc.), please contact us for a free consultation. If you think you may be able to report an arson attack or have seen something suspicious, contact us or call Crime Stoppers on 1800 333 000.

The NSW Crimes Act creates a number of serious offences relating to damage to property. Where the damage to or destruction of property is committed by means of setting fire or arson attack, the following four offences, contained in sections 195-198 of the Crimes Act 1900 (NSW), are likely to be relevant.

Intentional or reckless damage to, or destruction of property by means of fire

If a person either recklessly or intentionally causes damage to, or the destruction of property which belongs to another person, they may be liable for an offence under section 195. Where the destruction or damage is caused by means of fire, the maximum penalty is 10 years imprisonment, with an aggravated offence where the damage or destruction is committed in the company of another person(s), carrying a maximum penalty of 11 years imprisonment.

Intention to cause bodily injury to another by means of fire

This offence, found in section 197, relates to instances where a person dishonestly (i.e. with a view to making a gain for themselves or another person), destroys or damages property by means of fire. In this instance, the maximum penalty is also 14 years imprisonment and increasing to 16 years imprisonment if the act is committed during a “public disorder”.

Destruction of, or damage to property with intention to endanger life.

Under section 198, the most serious arson offence occurs when a person destroys or damages property with the intention of endangering the life of another. The maximum penalty for this offence is 25 years imprisonment. 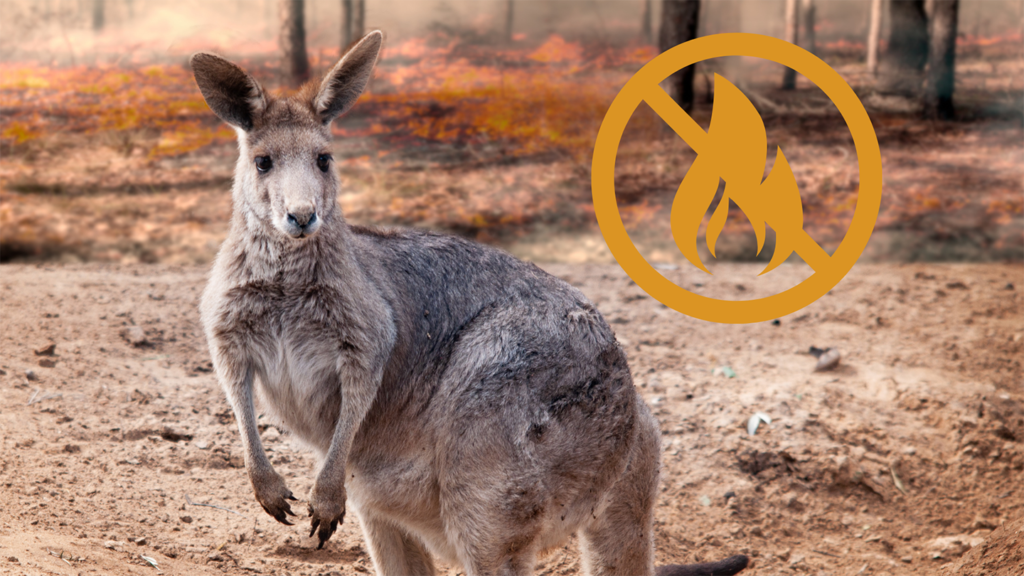 As noted above, recent amendments to the Crimes Act 1900 (NSW) have been introduced to deal with the significant risk of widespread damage to property, people, animals and land that might be caused by arsonists who are responsible for setting fires that may result in a bushfire. In recent years, Australia has faced increasingly disastrous bushfire seasons, of which arson attacks are often a contributing factor.

The amendments introduced section 203E, which provides that “a person who intentionally causes a fire and who is reckless as to the spread of the fire to vegetation on any public land or on land belonging to another“, is guilty of an offence. The maximum penalty for a breach of section 203E is 21 years imprisonment.

Given the risk that a bushfire may endanger the life of people, there is also a risk that someone who is found guilty of bushfire arson, where a bushfire does kill a person, may also be held liable for manslaughter or murder. 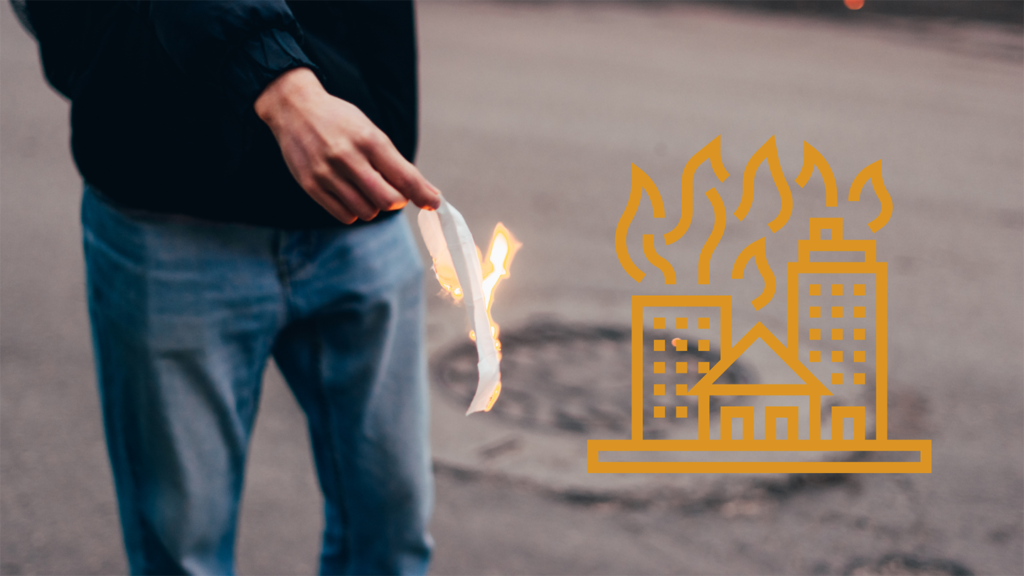 If you require legal advice in any criminal law matter, our expert criminal lawyers specialise in a range of criminal offences including those discussed in this article. Contact us for a free, honest consultation about how we can assist in your matter today.

The above is general legal information and should not be considered legal advice. You should speak with one of our migration lawyers for legal advice tailored to your specific legal matter. The courts and tribunals deal with matters on a case by case basis. It should also be noted that there may be delays due to COVID-19. Our lawyers are based in Sydney, we cannot assist with legal advice in a range of jurisdictions whether in Melbourne, Brisbane, Adelaide or Perth.

The arson was an accident. Will I still be charged?

To be charged with arson, it must be proved that the arsonist acted intentionally or recklessly (ie knowing that their actions may lead to a fire breaking out, but did it anyway).

I was negligent, will I still be charged for arson?

Generally you cannot be charged with arson for negligence as arson by definition requires you to have intended to damage property, or known that what you are doing might damage the property and acted anyway.

Negligence will not necessarily get you off the hook, as the prosecution may choose to charge you under other areas of law such as “causing grievous bodily harm by a negligent act.”

What evidence is relied on for arson?

Assuming it hasn’t been burnt, police often rely on evidence such as fingerprints and DNA, accelerants as well as circumstantial evidence such as telephone records, GPS logs/SMSs, telephone taps or intercepts, and materials, items found, and any other scientific evidence available.

Why do people commit arson?

Arsonists commit arson for a number of reasons. Sometimes it can be for-profit or gain, animosity, vandalism, crime concealment, political objectives, and of course psychopathological factors.

How long do you go to jail for arson?

What type of crime is arson?

Arson is the act of maliciously setting fire to or charring property or things such as cars, boats, or leaves in a public bush to cause bushfires.